Liquid-crystal-display televisions (LCD TV) are television sets that use liquid-crystal displays to produce images. LCD televisions are thinner and lighter than cathode ray tube (CRTs) of similar display size, and are available in much larger sizes. When manufacturing costs fell, this combination of features made LCDs practical for television receivers.
LCD TVs are quickly displacing the only major competitors in the large-screen market, the plasma display panel and rear-projection television. LCDs are, by far, the most widely produced and sold television display type.
LCDs also have a variety of disadvantages. Other technologies address these weaknesses, including organic light-emitting diodes (OLED), FED and SED. Early LCD sets were widely derided for their poor overall image quality, most notably the ghosting on fast-moving images, poor contrast ratio, and muddy colors. In spite of many predictions that other technologies would always beat LCDs, massive investment in LCD production, manufacturing, and electronic image processing has addressed many of these concerns. 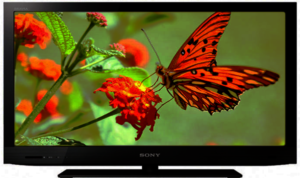 Fill our form and one of our team members will contact you soon.